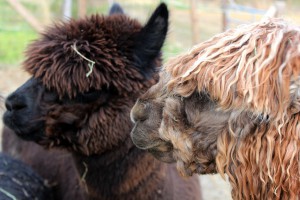 Related to the llama and the familiar one- and two-hump camels seen at the zoo, the alpaca is one of 6 species of camelids that exist today.  There are two alpaca breeds, the huacaya and the suri.  Huacaya alpacas have dense, fluffy fleece while suri alpacas have long, curly fiber.  Their fiber is sheared once every one to two years and can be processed to create blankets, clothing, and other beautiful products.  Alpacas weigh approximately 150 to 200 pounds and are about 3 feet tall at the withers.  A baby alpaca, or cria, is born weighing about 15 pounds after approximately 11 months of gestation.  The average life span of an alpaca is 15 to 25 years.  Unique features of an alpaca include their soft padded feet with 2 toe-nails, their dental pad rather than upper teeth, and their use of humming and spitting as a form of communication.

Alpacas were domesticated approximately 6,000 to 7,000 years ago in the central Andes Mountains.  Ancient Incan culture embraced the alpaca for its valuable fiber and meat and religious significance.  The Spanish invasion of South America wiped out almost 90% of the 50 million llama and alpaca population as they sought precious metals and more space for their sheep, goats, and cattle.  The remaining alpacas fled with the natives to the high plains of the Andes, surviving until present day.  Alpacas only resided in zoos in North America until 1980 with the importation of 10 alpacas.  The Alpaca Registry Inc. (ARI) was eventually developed in North America to maintain documentation of alpaca lineage, DNA, and ownership records.  The U.S. Alpaca Registry became closed to imports in 1998 and the North American Alpaca population grew to an estimated 80,000 by 2006.

Sign up to receive news about the farm- events, open houses, new alpacas, products and much more. There is always something going on.